A Return From The Past/A Nightmare On Elm Street (1984)

This is gonna be a kind of longish post, so I'm going to keep this intro short. Back in the day (2002) I made a site on Geocities called Abattoir Alley. I had almost forgotten about it, but then I was on the Internet Wayback Machine, and to my delight, those beautiful geniuses archived some of my old site! I had some half decent reviews up, and some pretty cool photos as well, and I had planned on sharing some of it here and on my Fright Skool Facebook page. Sadly, it would seem that only the following review I wrote is all that's left besides some index pages.
This review is of what is arguably my favorite horror movie, The original Nightmare On Elm Street. The Elm Street photo gallery that I had created was not archived, which saddens me greatly, as I knew I had gotten some pretty rare screencaps and made some cool photoshop madness with them, but alas, no such luck. Without further ado, here is my review from 2002 of the original Nightmare. 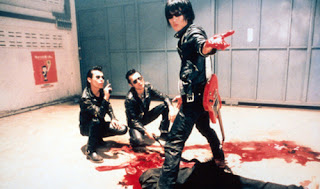 I do. I used to, anyway. I haven't been keeping up with the rising trend of watching Asian horror movies in a few years, so maybe it's time to get back into it.

Feel free to help me out, by the way. If it's come out since 2007, I likely have not seen it. If it came out before then, it's likely I have. So bear that in mind before making a recommendation, and remember - if in doubt, Google IS your friend!

Taking a peek around, these are the titles I am coming up with that look good to me. I want to know your thoughts, so if you've seen, reviewed, or featured any of these flicks, comment about it and leave me some links! I am ready for a good ole Asian Horror FEST!

Diary
OK, this looks interesting. Sounds more like a thriller than a horror, but it's the Pang Brothers, so it could be fun to watch...


Someone recommended this to me not long ago but I haven't gotten around to watching it yet.

I'm positive there are probably hundreds more, but I have an awake toddler earlier than expected so I'm going to cut things short, here. I want to know YOUR favorite Asian horror movies of the last few years! Leave them in the comments below, and if you have reviews - link em!!! Thanks!
Posted by michelle at 4:52 AM 2 comments:

For those of you who like your vampire movies to be REALLY FUCKING GOOD, I present to you: Near Dark

.
Fright Night and The Lost Boys are in there too, for good measure.
Posted by michelle at 12:37 PM No comments:

Posted by michelle at 8:50 AM No comments:

Posted by michelle at 9:52 PM No comments:

Posted by michelle at 4:10 PM No comments:

Let's just get it out of the way, guys - you can go ahead and call me crazy right now. I'm fairly sure that a lot of you are going to either hate me for the things I'm about to say, or -hopefully- you're going to have a laugh along with me, here.
I love the Halloween movies. I love John Carpenter, and Michael Myers. I thought Jamie Lee Curtis kicked some serious ass in the first film. Hell, I even love Rob Zombie (although his part 2 made almost no sense and I didn't care for it, for the most part.) 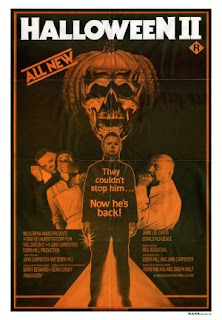 I just rewatched Halloween II the other night, and I gotta tell you guys - there's a lot of shit in there that you need a large amount of suspended disbelief to get past, and some serious plot inconsistencies as well.
I know, I know, it's only a movie, but still - The original Halloween is considered a classic, you would think that the follow up would have been of the same high caliber, but it just isn't.
The first WTF of the movie for me was the balcony scene. In the original, The Shape very clearly falls into the backyard off the upstairs balcony/porch at 0:56 in the following video clip:
In part II, Myers seems to walk backwards off the front porch balcony. You would think he would bump into the railing with the back of his legs, but you can see he clearly WALKS OFF the railing! (See 2:33 in the following clip. Not great quality but you can still see what I'm talking about.)
I know he's not human and all, but really? I don't quite understand why they didn't just use the same footage they already had from part one. They didn't redo the entire ending of Halloween for part 2, so why is this scene different?
Most folks are aware that Halloween II really ups the volume of blood compared to the original, which barely had any. Yet the original remains far more frightening to this very day. Honestly, I found Halloween II to be so boring, that all I was looking out for after the first 20 minutes was more goofs.
This shot, which is very reminiscent of many great giallo films of the 70's, serves as the start of a continuity problem... 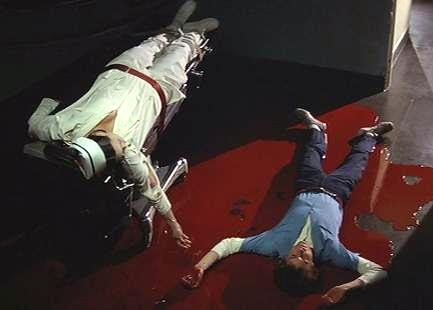 Jimmy slips and falls in a pool of blood - but where was it in the beginning of the scene when he first walked into the room? How did he not slip on all that blood in the first place??
A little while later, when Jimmy stumbles out of the hospital and gets into his car, there seems to be no blood on him whatsoever.
Considering that they took "Continuity Polaroids" like the one below, you'd think there would have been a lot less of them in the movie! What else? Oh, right... When did Laurie get stabbed in the shoulder? She got her shirt ripped and just barely scraped in part one. So why did the doctor say she had a stab wound? 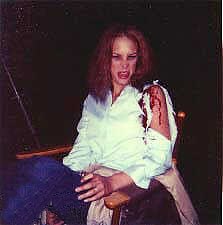 When Loomis and Laurie start releasing the gas, how come they don't start getting loopy? Ether ain't nothin' ta fuck with! Also, if he knows so much about Samhain, why can't he pronounce it correctly? Sheesh.
There's a lot more continuity errors and goofs that I didn't even notice, you can take a look at the IMDB page for Halloween II here.
See loads of behind the scenes and publicity photos from Halloween 1 and 2 here.